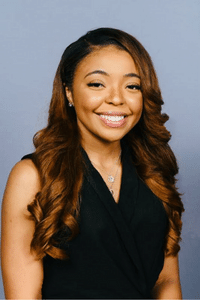 Taylor Symone’ Harris is a media personality & journalist from Saint Louis, Missouri. Taylor accumulated a total 24 credit hours toward her undergraduate degree as a dual enrollment student at Lutheran High School North and Saint Louis University before she started her tenure at Hampton University.

Taylor has made community service a priority in her life by staying involved in her community in Saint Louis. She is a member of the Saint Louis Alumnae Chapter of Delta Sigma Theta Sorority Incorporated, National Association of Black Journalists, Greater Saint Louis Association of Black Journalists, National Council of Negro Women Inc. Gateway Metropolitan Section, & Non-profit Marketers Network St. Louis. She lives by Shirley Chisholm’s quote, “Service is the rent we pay for the privilege of living on this earth.”